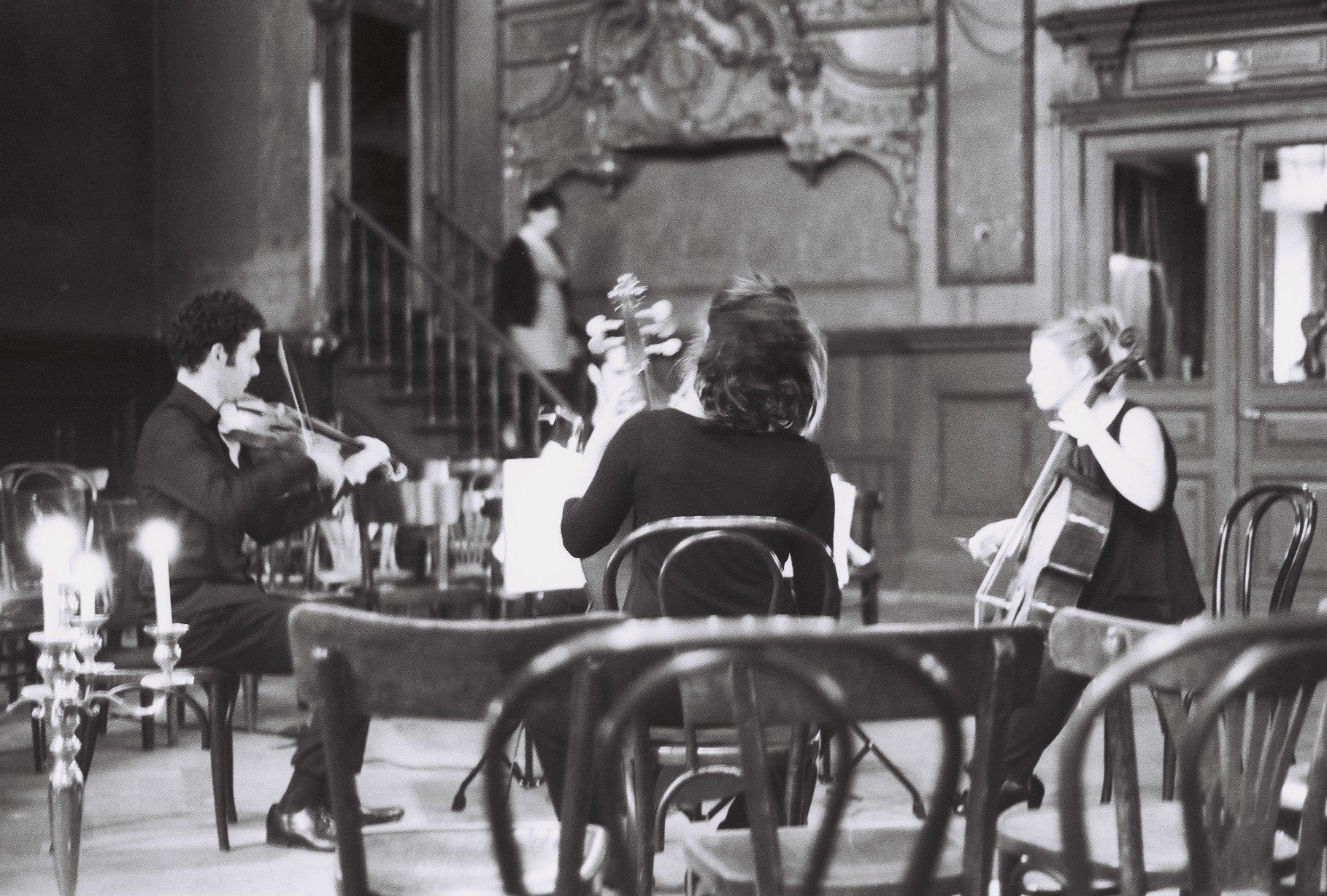 We are happy to invite you to the next Music in the Circle concert. The program will include works by Johann Sebastian Bach, Carl Philipp Emanuel Bach, Johann Gottlieb Goldberg and more, all played on period instruments.

*Free entrance, donations for this concert will be gratefully accepted.

As a boy soprano he sang solos with the Israeli Philharmonic orchestra and other orchestras. Later on, he performed as a violin soloist with several orchestras in Israel. After graduating from the Jerusalem Academy of Music and Dance, Hed moved to Germany to continue his studies with leading teachers such as Ana Chumachenco, Igor Ozim, Nora Chastain, Yair Kless and Reinhard Goebel, his current mentor for historically informed performance practice at the Mozarteum University in Salzburg.

During his studies he was supported by the “Freunde Junger Musiker” foundation, the Rahn foundation, the AICF, the Ronen foundation, Live Music Now, the Zisapel foundation, and Zfunot Tarbut. Hed also has received a number of prizes, including those of the Verbier Festival Academy and the Aviv competition.

Tim Willis was born in New South Wales in Australia. After discovering, at an early age, the sonorities of gut strings, he became interested in period performance and began studying at the Sydney Conservatorium of Music in 2010. In 2011, he began working regularly with the Australian Brandenburg Orchestra and a number of other ensembles in Sydney and Melbourne. He moved to Europe in 2015 and has since played with the Batzdorfer Hofkapelle, the Bonn Baroque, and the Magaretha Consort in the Netherlands.

He enjoys discovering and performing little or unknown chamber music from the baroque period. He works as an editor and his editions of previously unplayed works have been heard in recordings and performances of the Akademie für Alte Musik Berlin, the Capricornus Consort Basel, the Collegium Marianum in Prague, the Batzdorfer Hofkapelle, and many others.

Born in Israel in 1985, Avishai Chameides, following the example of his father, was introduced to the violin by prof. Vali Blutner. Switching to viola when he was 10, Avishai was immediately attracted to the deep sound and fundamental role this instrument holds in chamber music.

His adult musical education was mainly at the Conservatory of Milan, Italy and later at the Universität der Künste in Berlin, and in Lübeck where he completed his Master’s degree in the studio of Prof. Westphal.

For the last years, Avishai Chameides has been living in Berlin, where he works regularly with several orchestras, such as the Deutsche Oper, the Deutsches Symphonie Orchester and the Konzerthausorchester. He is also a founding member of the Noga Quartet. Winner of the 2015 Melbourne International Chamber Music Competition, the Noga Quartet was taught by the members of the Artemis Quartet in Berlin and the Alban Berg Quartet in Madrid and has been performing worlwide since 2009, acclaimed both by public and critic.

Swiss cellist Katharina Litschig lives in Leipzig, where she teaches while pursuing an international carreer as a chamber musician and continuo-player.

While completing her studies in Zürich with Roel Dieltiens and then in Leipzig with Peter Bruns, Katharina was a member of the Gustav-Mahler Youth Orchestra and played as principal cellist with the Swiss Youth Symphonie Orchestra, the Kammerphilharmonie Graubünden, and the Hamburger Camerata. She has also been a member of the orchestra Spira Mirabilis for several years.

Katharina has been interested in historical performance practice from a very young age. She began by following early music courses with Kristin von der Goltz and soon started playing the baroque cello and learning as much as she could about early music. Later on, she took lessons with Jan Freiheit, studying eighteenth century continuo-playing in depth. Today she is much in demand as a continuo cellist for baroque orchestras like the Akademie für Alte Musik Berlin, the Leipziger Barockorchester, and the Michalis Consort.

In 2016 she finished her master class diploma at the Leipzig Hochschule with honors.

Constance Ricard was born in Paris and lives in Berlin. She studied in Paris with cellist Marc Coppey and later moved to Germany where she studied with Peter Bruns at the Hochschule für Musik und Theater in Leipzig. Masterclasses with artists such as Robert Levin, Riccardo Minasi, Arnold Steinhardt, Peter Cropper and Balázs Maté have also had a geat influence on her musical developement.

In 2008 und 2009, Constance was principal cellist of the Internationalen Orchesterinstituts Attergau, Austria. Since then, she has worked regularly with several orchestras in Germany, including the Staatsorchester Hannover, the Rundfunk-Sinfonieorchester, and the Konzerthausorchester in Berlin, as well as with the French chamber orchestra Les Dissonances. She has also played as a guest in several new music ensembles, including the Zafraan Ensemble.

Constance is also very interested in historical performance. She is now completing her Master’s degree in baroque cello with Jan Freiheit at the Universität der Künste Berlin and has played in several ensembles on period instruments.

Between 2014 and 2016, Constance Ricard has been a fellow of the Live Music Now foundation in Berlin.

Jia Lim began her music studies in trumpet and music theory with a scholarship at the University of Michigan, USA before moving to Berlin to pursue her interest in early music as a harpsichord player. After completing her Konzertexamen with Mitzi Meyerson at the Universität der Künste in Berlin, she went on to obtain a Master’s degree in Basso Continuo and Ensemble direction at the Schola Cantorum in Basel, studying with Jesper Christensen and Jörg-Andreas Bötticher.

Jia has won prizes in international harpsichord and chamber music competitions and worked in several renowned baroque as well as modern music projects. She is otherwise often engaged as a répétiteur for opera projects and is an active pedagogue in Berlin.