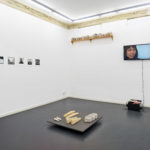 Thursday, January 5, 2017, 6:30 pm –
Curator’s Tour with Hannah Beck-Mannagetta and Ulrich Vogl as well as individual artists of the exhibition:

During the guided tour individual works will be explained in more detail, but above all the curators and artists will tell about the unfamiliar challenges and the risk with which they have been confronted by the exhibition concept.

In her performance, “I Have Never Been This Honest”, Chryssa Tsampazi will place herself in the position of each individual artist, as well as the viewer’s point of view on the exhibition.

In doing so, she will also refer to the titles of the individual works. The titles do have a special significance within the exhibition, since they have not only made the artists face the challenge of finding a title for an art work that is not yet meant to be one, but also to find a title that refers to the story behind the object and the reason why the work has never been shown.

The works of Chryssa Tsampazi (*1975, Germany) are based on speech performances and testimonial actions in which the body of the artist and those of the participants / collaborators are the subject and, simultaneously, the transmitting mechanism of the work. She borrows terms and practices from theatre and conceptual art to turn directing into a set of simple instructions. In doing so she invites people to follow them, thus contributing, inevitably, to the final outcome. Tsampazi is interested in the deviation that takes place in the course of every work and the collective aspect of the creative experience.