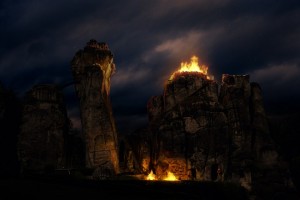 Karen Russo is an Israeli-born artist living and working in London. In her exhibition at Circle1 gallery in Berlin (opening on September 19)  she will show her video work “Externsteine” and a new series of charcoal drawings.

Karen Russo’s works are about knowledge systems considered esoteric, erroneous and diametrically opposed to the enlightened tendencies Western culture prefers to adorn itself with.  As such, she deals with occult rituals, collective mythical components, the dark side of wisdom taken from kabbalistic and Rosicrucian sources, thaumaturgyandparanormal phenomena – in short, all the knowledge rejected by modern science. That these abject themes are framed into the context of art by Russo gives them a renewed legitimacy, and this aesthetic perspective allows them to re-emerge on the surface, as a certain possibility of an unknown reality, being the upside reflection, as if in a curved mirror of what we perceived before to be the truths of life. 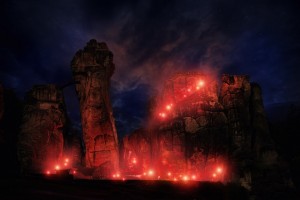 “Externsteine” (2012) looks at a site in northern Germany which attracts both neo-Pagans, New Agers and neo-Nazis to seasonal celebrations, in which each cult relates Externsteine’s extraordinary landscape to their own version of ecological, spiritual and political mythology.

An undeniably mysterious place, Externsteine is thought to have been a pagan Germanic cultic shrine and subsequently used by Christian hermits throughout the Middle Ages. Although the pre-history of these rocks is largely unknown and archaeological digs have turned up little, Heinrich Himmler nevertheless identified the site as sacred to the ancient Germans due to its “cosmological ancient knowledge”. This was sustained through the assistance of archeologists who helped to shape an imaginary history which was later discredited as false. Pulled into the bizarre space where Nazism and occult pseudo-history overlapped, the actual history of Externsteine was overshadowed by an entirely imagined ancient Teutonic history. To this day, it still attracts German nationalists and Neo-Nazis.

In “Externsteine“ Karen Russo uses documentary and fictional materials toresearchthe ideological, historical, and cultural implications evoked through the stories we tell ourselves about the origins of our locality.

Footage was filmed during the celebrations of the Night of the Witches (a pagan ritual) and summer solstice and consistsof interviews and documentary footage of ritual ceremonies and activities conducted at the site. This is mixed with staged scenes, including a Nazi-Yoga session based on ancient Runes, and ceremonial scenes – some of which reference Kenneth Anger’s „Lucifer Rising“, which was partly filmed at Externsteine. Woven throughout is a poetic narration about utopia, illuminating the romantic, weird or destructive social codes of those who inhabit Externsteine.

The film examines how secular, rationalist culture struggles to acknowledge or answer the continuing attraction of mythical and fundamentalist ideas, at a time when nationalism and irrationalism appear to be experiencing a revival. 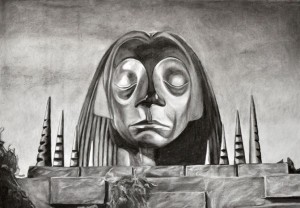 Alongside the film, the exhibition has on display Karen Russo’ drawings. Following the same spirit as her film, they take their inspiration from ancient cults, constructed myths and historical facts and create a hybrid reality, focusing on the dark side of collective dreams and prefered versions of desired histories. Her sources vary from high and low concepts of culture, as well as fictitious and authentic historical materials. In doing so, Russo suggests  a different approach to what we define and constitute as a civilized space and offers her own version of things to come. 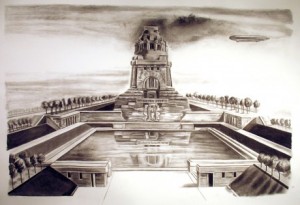