In our next exhibition which opens on September 19th we will show the video work “Rehearsing the Spectacle of Spectres” by Nir Evron and Omer Krieger. This is the first joint work of the artists, which combines cinematic and performative sensibilities, proposing political and aesthetic questions situated in a public space and the human body. 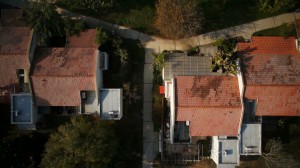 Rehearsing the Spectacle of Spectres are the opening words of a poem written by Anadad Eldan (b. 1924), a member of Kibbutz Be’eri, a collective community in the south of Israel, founded in 1946 near the Gaza strip. Eldan, the Kibbutz Poet, wrote librettos for kibbutz ceremonies, holiday performances and agricultural pageants, and also published numerous books of his own lyrical poetry. Eldan’s poetry is characterized by an intricate and alliterative style, phonetically musical, based on a rich and ancient Hebrew. As the writer of  a collective language and a Bible teacher for generations of kibbutz members, Eldan is widely admired but also considered  a controversial and peculiar Poet.

The video was shot entirely in Be’eri, as Evron and Krieger invited a group of kibbutz members to recite the 26 verses of this opaque and suggestive poem. These sequences are combined with aerial and outdoor shots showing sites of assembly, stages of collective expression, public sculptures and architecture.

The work surfs the wave of the kibbutz phenomenon as a 20th century avant-garde and radical social experiment situated today on the border of Israel and the Hamas-governed Gaza strip, one of the most charged geopolitical environments in the world.

Nir Evron & Omer Krieger seek to create a new image of the kibbutz, which stems from the architecture of communal life and the performativity of togetherness. The artists salute the poetic action taken as part of the project of society and state design. Geographically near, high above, under ground, deep in the past and in language, this video anticipated the recent atrocities in that region. “A quiet shame whishes/ through the quiet undershirt”.