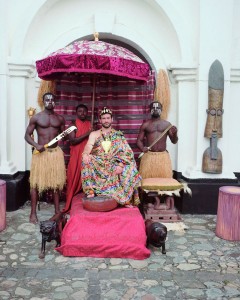 Doug Fishbone’s exhibition at Circle1 brings together two major recent works by the London-based conceptual artist, that extend his examination of consumer culture, mass media and the relativity of perception. These two works, Elmina (2010) and Hypno Project (2009), question the way information is processed and presented in the contemporary visual landscape, and both undermine the relationship between audience and content in different ways. 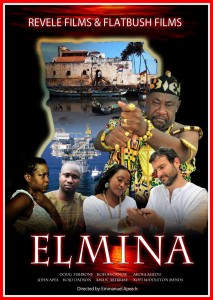 In Elmina, Fishbone placed himself in the middle of a Ghanaian melodrama, acting the lead role in a film with an otherwise entirely black African cast, many of whom were celebrities. He wanted to see what would happen if he entered into a popular melodramatic film, in a culture different from his own, and featured as the lead, without ever referencing questions of race, or explaining what was going on. This gesture allows the film to operate in both the fine art context, where he normally operates, and the West African popular movie world. As such, it works differently depending on who views it and where, offering an unexpected perspective on the possibility of a shared cinematic or visual language. 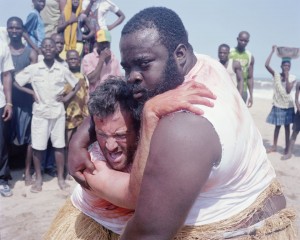 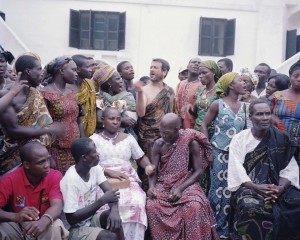 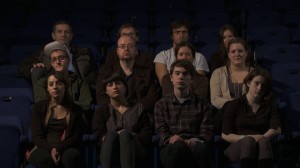 Likewise, the Hypno Project plays with the audience dynamic from an unusual vantage point. An audience of 12 people was filmed after they’d been hypnotized, and their responses were manipulated with post-hypnotic suggestions. They were then shown an elaborate narrated slideshow in which a number of images and sounds were embedded that triggered specific responses outside their conscious awareness, each person having been instructed to respond to different visual and aural cues. The piece treats them as both subjects and objects, those who watch and are, in turn, watched themselves. The gallery audience watches the same narrated sequence as the hypnotized test group, but from a completely different perspective, without having been primed or prompted.

The project opens a window on to an alternate zone of consciousness, and as with Elmina, presents the possibility that a given work can operate on a number of different levels simultaneously – depending on who views it and in what context – none of which is presented as definitive.