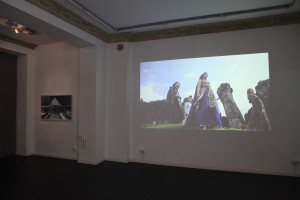 rk “Externsteine”, takes as its subject the rock formation in Germany which attracts neo-Pagans, new-Agers and neo-Nazis to seasonal celebrations, in which each cult relates Externsteine’s extraordinary landscape to their own version of ecological, spiritual and political mythology. 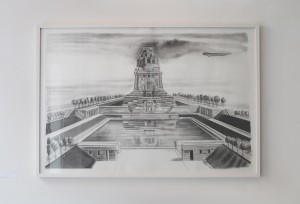 Using documentary and fictional means, Externsteine unravels how German Romanticism, contemporary political extremism and new-age spiritualism rework different ideas about history, myth, nature, community and human identity. Alongside the film, the exhibition has on display Karen Russo’ drawings which follow the same spirit as her film. 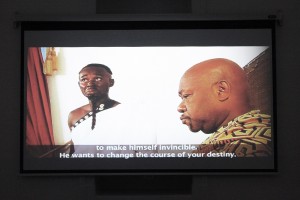 Doug Fishbone’s work Elmina (2010),  presents an unusual experiment in collaboration and co-authorship shot entirely on location in Ghana. It was scripted and filmed by Revele Films, a leading Ghanaian production team, with a cast of major Ghanaian celebrities. The only artistic intervention is the insertion of Fishbone, a white American artist, as the lead role in an otherwise completely black African production. Through this simple gesture, Fishbone tests the viewers’ preconceptions of how we interact with cinema and fiction. By fully immersing himself as an actor in these conditions, he relinquishes editorial control as an artist. The project continues Fishbone’s investigation into the relativity of perception and understanding, pushing what audiences expect as the acceptable limits of role and representation in film. Elmina had its world premiere at Tate Britain, London in 2010 and was nominated for an African Movie Academy Award in Nigeria in 2011.

In the work Hypno Project (2009) by Doug Fishbone, a group of 12 people were been hypnotized by a professional stage hypnotist, as they watched a narrated sequence of images.  Each member of the audience was given specific suggestions while under trance, instructing them to behave in certain ways at different visual and aural cues. They were then woken, and filmed as they viewed the video. The results were remarkable, and their reactions raise a broad range of questions about manipulation and behavioral conditioning, and the relativity of perception and understanding. The screening version shown here presents the project in a split-screen format, on one side the video narrative which the audience was given to watch, and on the other, the audience itself is shown, filmed as they watch and respond.

In their work Rehearsing the Spectacle of Spectres (2013) Nir Evron & Omer Krieger seek to create a new image of the kibbutz, which stems from the architecture of communal life and the performativity of togetherness. The artists salute the poetic action taken as part of the project of society and state design.