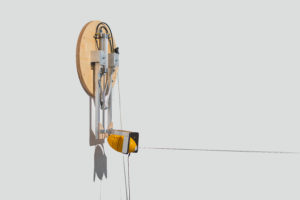 Aharon Ozery’s current project Ledminton (first exhibited in 2015, Berlin Artists’ Statement, Poland) will be on display in our next exhibition at CIRCLE1. The contraptions built by Aharon Ozery may seem at first to belong in an industrialized world order, yet the actions they perform, repetitive and cyclical, are carried out to no conceivable end. As opposed to the growth and progress championed by the capitalist worldview, these machines celebrate their own inefficacy and proudly exhibit the redundancy of their actions. 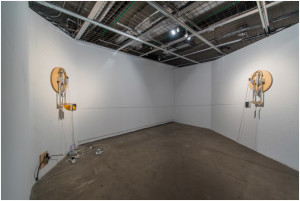 Unlike most mechanical operations, which shift from one position to another to accomplish specific tasks, Ozery’s machines are made to explore the dynamics of movement – its repetition, suspension, delay and reversal – tapping into an inner logic that discloses the poetical dimension hidden in mechanical bodies. This repetitive dynamic, which may be linked to the recurring circular gestures of religious rites, is evident for example in Ozery’s Endless Project, a cumbersome contraption whose sole task is to transfer eggs from place to place through a circular maneuver.

Ozery opts mostly for natural substances such as metals (iron, aluminum and more) and wood, but also polymers, reworking these to animate the material and bring out a softness in it that was not present in its previous state. The mechanical solutions devised for a given action are hardly the most practical and straightforward, as they are meant to serve the aesthetic dimension of the action, which Ozery places at focus. Ozery would want to immerse the viewers in the space of the work, to let them feel for a moment as if they are part of the action, an extension of the mechanism they behold.

The first prototype of Ledminton, includes an oblong-shaped, light-emitting object that travels back and forth on a system of horizontal wires, in varying frequencies. The wires, attached to pairs of handles on both sides of the exhibition space, are operated by a pneumatic mechanism that pushes each pair of handles in and away from each other to open and close the wires. As air is being pumped through pipes, an up-and-down movement occurs that launches the object from side to side in varying intervals, of 2–10 minutes. The object’s sideways sway, punctuated by short delays each time the object reaches a wall, is reflected in the light it emits, which intensifies as the speed of movement accelerates.

Originating from a LED light bulb installed within, the shimmering flickers may recall the electrical pulsations of a beating heart. Together with the sound of air being pushed into the pipes, the light pulses generate something of an “electrified,” vibrant environment. As each unit runs on its proper mechanical logic, the movement is likewise regulated by variables such as the length of the wires, the amount of air squeezed in, and the weight of the central moving object.

Ozery says that this wire-operated movement was directly inspired by a children’s play called “hand draw ball,” where two participants standing across from each other launch a football-shaped object attached to wires by swiftly opening and closing their arms. Ozery: “As I set out to explore and replicate this back-and-forth movement in mechanical form, a system began to emerge where the interconnected parts alternate between independent and prompted movement – an interplay of sporadically-occurring events that converge, occasionally yet inevitably, into a systematic and endless cycle.”