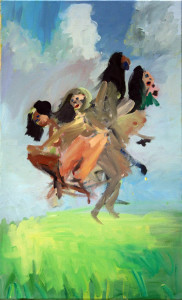 Ofir Dor’s exhibition GirlyGirlyGirlGirl which opens this month at CIRCLE1 revolves around some figures, not so much a specific person but rather an archetypical one, or few. Ofir Dor is looking for something very simple; one figure or a couple somewhere, usually outside. He uses few positions and repeats them again and again.

Reclined or leaning against a tree, a woman pulled down to earth, as if deflated, trying to pull her blackened face upwards. A jumping woman, sometimes with rabbit’s or kangaroo’s legs, a more powerful and energetic creature. Fished woman or fish-woman, an awkward creature, half mermaid, pulled out of the water. Flying woman, moving about regardless gravity. A man reclined on a table (self portrait), Cannibals in a sunny park, a man tied to a tree. Ofir Dor finds it at the same time simple, direct and rich. He keeps making more and more variations, sometimes a dozen or more, of the same scene. “It’s still fascinating, there’s something about the object of desire that blinds you”, says Ofir Dor, “and the incapability to see something you’re looking at is bewitching”. 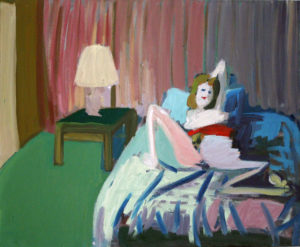 For Ofir Dor an image strikes as powerful, and calls to be painted. It might be in front of the eyes or it can rise from a dream, or it can be imagined, or built as an allegory, a sublimation of feelings or inner state of events. It’s very rare however that an idea will remain fixed from beginning to end. Once you start painting the idea transforms, it develops, it might dissolve, or prove false. For Ofir Dor painting takes a lot of time, and the whole body is an instrument for sensing its quality. “It’s like a taste in your mouth”, he says, “or a sore stomach, it’s a very physical thing, its philosophy but it’s dirty, it involves not only the mind. The painting is sometimes the actual looking for the idea. 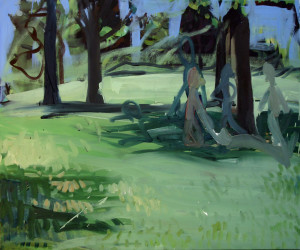 For Ofir Dor the act of painting is a way of being, it’s a lot about what actually happens while doing it.” Through practicing it, the way you see and think changes”, he says, “It’s one thing to be looking at a painting but I feel I really see it only while painting”. Many paintings of Ofir Dor were done while looking at another painting, (either his or another painter’s), sometimes from a different angle or in a different light, or tilted etc.

For Ofir Dor painting changes the world, shifts one to a different state of concentration, excitement and sensitivity, it’s an ethical sphere, where one makes choices of value, regarding good and bad, beauty and truth – towards meaning.