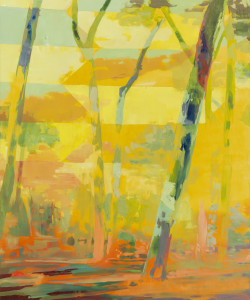 Entering the paintings by Michelle Jezierski with one’s eyes is rather like having a psychedelic experience. Her condensed visual stimuli are at their core reflections of interior and exterior spaces. After an extensive forest phase, the artist now devotes herself to questions of space—fractured, simultaneous and non-simultaneous space, and the landscape within a landscape. 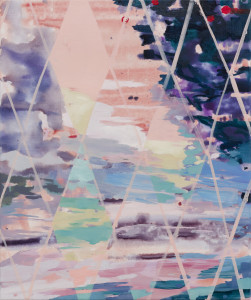 Michelle Jezierski fears nothing so much as the dangers of ossification. Thus openness is her principle, in the sense of an opening from one interior space into another. Jezierski maintains the fragile balance between the definable and fixed on the one hand, and the flowing and amorphous on the other hand. This painter develops collaged pictorial identities in transition. To disapprove of the open-endedness and irregularities would mean to ignore the poetic effect of these works, and to restrict the beholder’s intuition and sensorium for the associative horizon of these works. 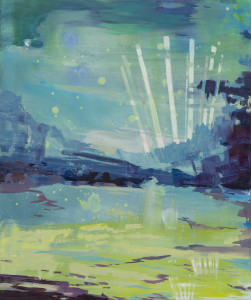 Only rarely do we see such paintings of light in young German art. Jezierski manages to interweave the features of the psychoactive so delicately that she creates a timeless visual sound carpet. Sometimes structurally open color formations that drift across the canvas condense in such an endless manner until the narrative elements that are weaved into them dissolve like a piece of magic sugar, but remain slumbering beneath the surface. Everywhere, the self-referential flexibility of this painting of actual intellectual and spiritual contemporaneity functions as a transmission belt between impression, expression, and seduction, as a missing link between various contemporary approaches that combine the figurative with the non-figurative. At the interface between abstraction and figuration, we experience an intoxicating feast for the eyes.