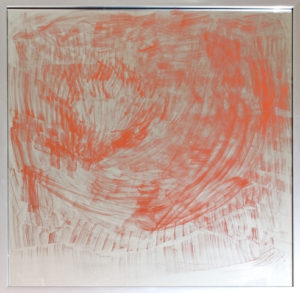 Noble Surface is an exhibition of CIRCLE1 Gallery in collaboration with Eigen+Art Lab, presenting the artists Amelie Grözinger and Alex Lebus.

When asked in an interview about the construction of reality and how to deal with it, philosopher and physician Heinz von Foerster answered: “Where is reality? Can you show it to me?”

Likewise Amelie Grözinger and Alex Lebus, two artists living in Berlin, question “reality” in their exhibition Noble Surface, which cannot be defined as such and manifests itself in the possibilities of different realities.

The title of the exhibition Noble Surface contains ambivalence. It suggests a high degree of industrial character, efficiency, luster, appearance and perfection. This assumption is first confirmed: Minimalist, cool and clear are Lebus’ mirror works and Grözinger’s folding works made of silver paper, that structure the gallery space.  But it is deceptive. The eyes of the artists are sharpened for the disagreement and for the deconstruction of the normal.

The individual objects allow concrete conclusions to be drawn towards each other and to the space. They are unfinished and open to the extent that they are interrelated with each other and with reflective subjects.

Alex Lebus places opposing mirrors in two corners of the room. One is a considerable length of 3 m, the other, smaller in its dimension, faces it. Two further mirrors lean against the longer sides of the rear, smaller space and face each other. The industrially manufactured backs of the mirrors are scraped off. Alex Lebus treats these with acid to show words and letterings. For the time being, the writing appears as a closed narrative, which can only be read and solved by the reflection on the surface of the opposing mirror.

Mirrors, one would suspect, serve the perception of one’s own reflection, the observation of other subjects in a space as well as witnesses. However, Lebus does not permit a dissecting and confirming view through the mirror. It is merely uncertainty and exposure to one’s own perception that are reflected back and forth. The mirrors, which stand in corners, communicate and reflect with each other and line a time-capsule – a dualistic construction of truth and semblance, of infinite planes and self-sufficient self-reflection, which pass through the space and experience of perception.

The work of Lebus is countered by the works of Amelie Grözinger. Similarly, Grözinger negates a one-dimensional surface. At first sight, her works follow a clear structure and regularity: paper-folded hexagons stretch together as a constantly growing web across the surface. For the moment, the folding process is stopped, but could be resumed at any time, expanding the network of geometric shapes to infinity. If you follow the mathematical principle of Benoît Mandelbrot, you can zoom in on Grözinger’s geometric construction, and thus always hit the same basic structure of the hexagon. It looks as if it consists of many small copies of itself.

Mandelbrot was able to investigate the complexity of roughness and natural chaos by using fractal mathematics. He could create order in pattern-like structures that seemed wrinkled, broken, branched, and infinitely complex. Chaos and order as binary entities are no longer mutually exclusive. Following the system of an algorithm, Grözinger splits the surface, the whole, into hundreds of small things or finds these innumerable little things and sews them together into a complex web. Unlike programmed algorithms, Grözinger allows chaos, error and chance, the affirmative and the sensuous to a certain extent.

The exhibition is a mirror of our own. In exchange, the two artists present a current inventory: We write algorithms that we can no longer read. We create something that is unreadable every day. We rely on our perception and accustomed narrations. We click through realities, illusions and surfaces, lose ourselves in chaos and complexity. When do we begin to lose control? Where is reality?