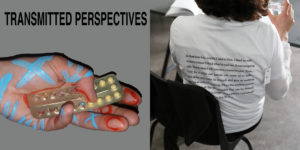 Two female artists confront topics such as the industrial revolution(s) and colonialism from a global western perspective. They explore the way these topics are carried in our collective  memory and consciousness, from a critical point of view.

In both pieces, the artists examine their practices in collaborations with sound artists.

On the Surface of Text / Ofri Lapid in collaboration Ben Osborn

“On the Surface of Text” is a reading session which combines text, sound bites and props and takes place with the participation of the audience. The reading session examines the manner in which literacy plays a role in the establishment of colonial power. It follows the story of Sankama, “the first of the Amazonian Piro tribe who claimed to know how to read”, which was put into writing in 1947 by the missionary and linguist, Esther Matteson. In the story, Sankama demonstrates his point of view on the condition of his people, who were forced into debt slavery, through a radical, critical oral performance. Looking at the paper as it speaks to him, Sankama prophesies the arrival of airplanes with Western clothing and the uprising of the colonized people.

Ofri Lapid (b.1983, Haifa) studied visual arts in Berlin, where she currently continues to live and work. Her artistic practice explores political and economic agencies invested in the making of cultural heritage, in academic research, in field work and in the museum realm. Her work involves collaborative, site-specific projects which often take place in remote villages around the world. Since 2016 she’s been working on a practice based PhD, which she dedicates to the study of Amazonian traditional designs and the manner they were narrated and recorded in anthropological discourse. Lapid’s work was exhibited in various institutions, including NGBK, Berlin, Heidelberg Kunstverein and Hambuger Bahnhof Kunstverein. In Summer 2018 she will participate in Bangkok Biennial, Thailand. ofrilapid.com

Ben Osborn is a writer, composer and sound designer. His soundtracks and sound designs have won the Cameron Mackintosh Award, the Methuen Drama Emerging Artists Award, the Peter Brooke Empty Space Award and a Manchester Theatre Award. His critically acclaimed libretti have been performed at London’s National Portrait Gallery, the Bristol Proms and the RCM Britten theatre among others. The debut book/EP ‘murmeln um schiffland’ was released in 2017 by Moot Press (Bristol) and Wanda Portal (Berlin), with a full-length album to be released in 2018 by Nonostar Records. He is a co-founder of and teacher at Berlin’s Open Music Lab, a free school for refugee musicians. benosborn.blogspot.de

The performance Pearls, Providers, Progress introduces us to the Industrial Woman in the middle of a conversation she is having with herself. She thinks about her existence in a world altered by the 1st, 2nd and 3rd industrial revolutions – and currently going through the 4th one. Her consciousness and sub -consciousness bring up very different views, while her window to the external has the answers to all of her questions.

Steinunn Gunnlaugsdottir is a visual artist, currently living and working both in Iceland and Germany. She wanders between various fields of visual art; sculpture, video, performance, sound and installations. At the core of her work is the humanimal’s inner existential struggle – and how it confronts and combats the structures that surround it – or surrenders to them. www.sackofstones.com

Theresa Stroetges holds a masters in musicology and sound studies. She is a composer, musician and sound artist and is based in Berlin. She is especially interested in breaking up conventional performance practices and borders of genres. Besides working on her own musical projects and sound installations she likes collaborating with artists from all kinds of perspectives and has developed sounds for video, film, dance, poetry, performance and visual art in the last years. www.goldendiskoship.com