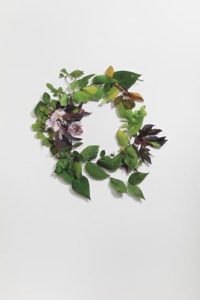 The subject of memory stands at the heart of Dana Yoeli‘s profoundly personal yet universal work. Memory, by nature, is illusory and intangible. Nevertheless, Yoeli chooses it as her subject and transforms it into substance, into physical matter.  She fluctuates between nature and artifice, documentation and fabrication, life and taxidermy.

In Bayreuth, Germany Yoeli documents her personal journey following the footsteps of memoirs left by her cartographer grandfather. Throughout her journey in his birth city she 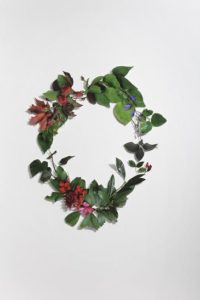 surreptitiously gathers flowers in specific locations.  She records the exact coordinates of the location, documents the surrounding urban and natural landscapes in still photographs and then blurs the map of the city to the extent that the context vanishes. The flowers, having been meticulously collected, are then photographed, printed and excised from the paper. These two dimensional flowers are then arranged into a series of wreaths which in turn are photographically documented again and again in a sterile studio.
The works in her artist book Fichte / Ashuchit  range from the roots of the spruce hidden beneath the surface humus to the flowers sprouting from the top that symbolize its maturity and the peak of its glory.  In this space, between the subterranean, primordial threat and the blossoming aesthetic, Yoeli weaves a personal story using a nearly forensic photographic technique devoid of sentiment.  Her family history becomes a foreign element within an organic environment.

The structure of the work is both seductive and troubling.  Hand in hand with the beauty of 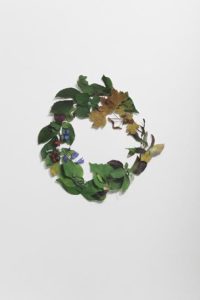 little flowers that are turned into wreaths, it both demands and frustrates any effort to piece together context in spite of the maps, photographs and precise coordinates.  Ultimately the apparent invitation to participate is not and cannot be realized.  The inability to establish oneself in time and place turns to discomfort and alienation that approximates the alienation of the artist within a profoundly troubling context.  The history is loaded and unavoidable.  Germany of the past and Israel of today are the poles within which this work exists.

This loaded relationship is expressed in the essential difference between the lasting root and the ephemeral flower.  While the flower may easily be plucked and quickly wilt away, the root persists and regenerates, it can be destroyed only by forcibly wrenching it from the soil.  In Yoeli’s work, through her obsessive collection, documentation, arrangement and re-documentation the ephemeral is chronicled and achieves its own permanence that persists in parallel with the subterranean root.

The Wreath, the object Yoeli utilizes both as an historical archive and an emblem of alienation, is itself paradoxical, a symbol of fertility, triumph and commemoration as well as a marker of death and a token of grief.

As in her previous works, Yoeli seeks to produce an archetype, and the flower wreath becomes that model that organizes reality with structure and discipline.  It allows for a view of a complex reality, which cannot be captured otherwise. It allows one to commemorate the living, preserve memory, classify knowledge and organize personal and collective experience. Ultimately it is merely a reflection of something else, an emblem of something larger. 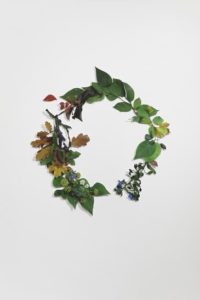 However, the archetype that Yoeli creates in this work is more complex. While it is made of materials that are the matter of memory, and while it does symbolize a fabric of memories that cannot be grasped without a scaled-down representation, it also works to undermine, to erase and to extinguish the personal, identifiable details. Like the blurry map, Yoeli’s archetype asks, even requires, that you get disoriented in it; to become emancipated from the shackles of time and place, to blur the private and the personal, and to reload the elements with a new meaning.

Ashuchit is a work detached from space and time.  Using the form of a book is insidious.  The ostensibly intimate format provokes an urge to load it with a personal story but at the same time puts a barrier between the personal and the collective and raises doubt regarding common destiny and collective memory.

Yoeli is ambivalent towards Man’s urge to pin down reality, to find orientation in space and
contain nature. While she introduces scientific elements, from the fields of cartography and symbolism and places them in an algebra-like proof, the results are strange and deceptive. The viewer is left suspended in an indeterminate space, and the result of this process won’t gather into a QED, “the very thing it was required to have shown”.