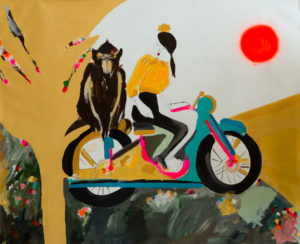 It starts with a paradox: Aren’t highways the opposite of furniture? Movement, fluidity, itinerancy. Highway Furniture is the name of the joint exhibition by Alona Harpaz and Bettina Allamoda. But even being on the move requires a setting, needs objects and images.

Alona Harpaz and Bettina Allamoda have trodden very different paths to come together for this exhibition, which they see as a double single show. Alona Harpaz was born in Tel Aviv; her mother from Romania, her father’s family from Poland. Can it be labeled exodus that she now lives in Berlin? “My darling, we have reached Europe!”: These were the tearful words of a Syrian father to the child he thought he had lost in the dark night while crossing the Mediterranean. A video of the scene went viral on social networks. These words now greet visitors to the exhibition, spelled out in neon by Harpaz. Stories of flight know no end, and they are translatable; from Arabic into Hebrew into English and back. Is an Israeli returning to the Europe that drove out her ancestors also a homecoming? 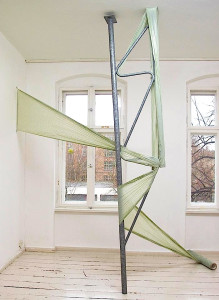 One thing is certain: Berlin is a home for Alona Harpaz. Just as it is for Bettina Allamoda. Born in Chicago, she has been an indispensable voice in the Berlin art scene since the nineties. But who is now on home turf at the Circle1 Gallery – a venue where the diverse Israeli art scene is finding its place? For Bettina Allamoda, exhibiting at Circle1 is like travelling on her own street. And for both of them, this encounter is an experiment, not just the meeting of two different biographies, but of two different mindsets and modes of working entering into a dialogue with each other. Or better still, starting to dance.

Dance lies hidden in both of their work. One of Alona Harpaz earlier key works, the video series “Salt”, was inspired by her father’s dancing. Set in a huge sports hall, “Salt 3” (2014) depicts Harpaz’s father, a lead dancer in the thick of proceedings, fluid in his movement, enjoying his physicality in a quiet, unnarcissistic way. How does an Israeli of his generation live – those who helped build the 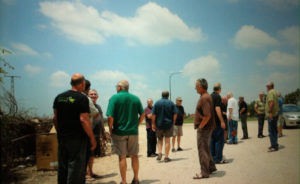 nation, who see themselves and their people as the ‘salt of the earth’? In “Salt 2” (on view in the video room), her father is seen among his old comrades from the Six-Day War. They speak of the past. Like an ethnologist the daughter records their brittle voices and observes their aged bodies, which the imagination finds hard to picture in uniform. Her own generation, however, is more likely to find reference in Harpaz’s painting; in her vibrant, almost aggressive bright colors, in her slightly punky girlishness.

And isn’t it an almost performative dance that Bettina Allamoda orchestrates with her abstract fabric sculptures? Allamoda’s complex praxis is located between the fields of architecture, history, society and the body. Meticulous research on historical events and societal contexts form the backdrop of her collages, installations and sculptures, which are often characterized by the discordant interplay between diverse materials and principles. Through a very site-specific, spatially reactive mode of practice, fashion, pop culture and abstraction give way to allusive referential connections. 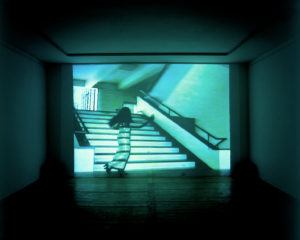 he confronts us with the rugged steel lattices and scaffolds intended to display highway signs. But instead they now wear stretch dresses and are supported by lengths of fabric, which Allamoda pulls into place until they reach a precarious, sculptural equilibrium. The path over the highway of this exhibition also leads us back to the 1999 video, “Performance collage: Bauhaus Performance”, in which Allamoda, dressed in a white sequined dress, presides over projected film recordings that show both the architectural traces of the Bauhaus and the legacy of Nazi urban planning in the Weimar cityscape. She turns around, points, reaches out. It’s a cool anti-dance with the urban fabric, the testimonies to modernity and totalitarianism.

Alona Harpaz and Bettina Allamoda developed this exhibition together, through a tentative, ever-more intensive acquaintance with each other’s works. They requested works from the other, mutually reflected the image they obtained of the other, but still remain resolutely themselves for this exhibition: Double single show. They are extremely different, yet surprisingly close. Like two people travelling together.

Text by Elke Buhr; translated from German by Gareth Davies