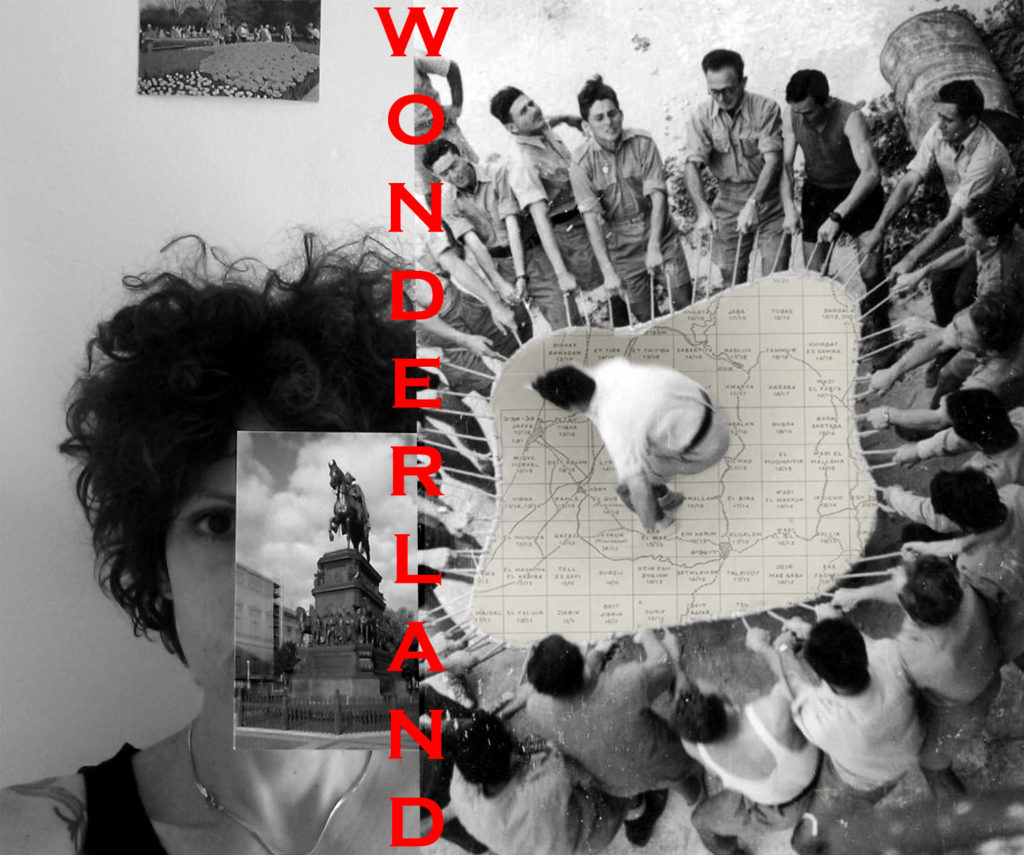 This event brings together works of two Israeli female performers who deal with one’s connection to land/territory.

Both of them question this theme through exploring rooted concepts and conceptions, breaking them into small details to be investigated.

‘Bingo Palestine’ is a nomadic game/performance enacted in various cities and contexts, aiming to unfold new arenas encountering our relation to the Israeli/Palestinian territory. The game revolves around a map of Palestine drawn by the British Mandate prior to the war of 1948. During the event this map is transformed into playing boards, the participants reorganize the space, share fake memories and navigate through imaginary landscapes.
By gathering as players, ad hoc cartographers or misusers of the map, we will engage in different interactions with the space and the historical moment it embodies, inventing new trajectories between what can be said, imagined or done in relation to it. The gaps between our knowledge and colonial fantasies, between the map and the territory, between speech and the body, are our spaces of action.
We need new games!

*Bingo Palestine is supported by ‘The Lottery Foundation for Arts and Culture’.

Netta Weiser is a performer, choreographer and performance maker based in Berlin. In her artistic work she explores how performance art can play a critical role in the production of common experiences, new interactions and different kinds of knowledge in relation to political narratives and historical events. She holds a BSc in Neuro Sciences from Tel-Aviv University, and currently is a graduate student in the Interdisciplinary Program in the Arts, Tel-Aviv University.  Her artistic education includes studies at The School of Visual Theater in Jerusalem and at the Maslool training program for professional dancers, Tel-Aviv. As an interdisciplinary artist, Netta collaborates with composers, visual artist, theater directors and video artist. Her works have been presented in galleries and performing arts festivals in Europe and Israel such as Solo festival (Tel Aviv 2017) Anti-disciplinary festival (Geneva 2016), Grec festival (Barcelona 2015) among others. nettaweiser.com

‘Departure Gate 9A’ revolves around the experience of leaving one’s homeland for starting a life in another country whatever the reason for this act may be. The work aims at focusing on the human experience involved in the immigration process. The themes that are explored in the work are part of this process, such as the occurrence of the specific moment in which one decides to leave one’s home and the reasons the decision occurs; the physical objects one chooses to take with him/her to the journey; mentality differences between one’s homeland and the country one moves to and the ways of dealing with them; the hardship one faces as a result of immigrating to a new place; the need to start communicating in a foreign language and the ways one copes with not being able to freely communicate.

Her works are social and political and deal with themes such as social conditioning and their control over our consciousness, attachment to objects and ideas, the individual vis-a-vis the collective, the Israeli occupation, collective memory and its influence on individuals’ behavior.

Her works were performed in theatres and festivals in Tel-Aviv, Haifa, Calcutta, Munich, Berlin, Cincinnati, Ohio, and in NYC. micadvir.com