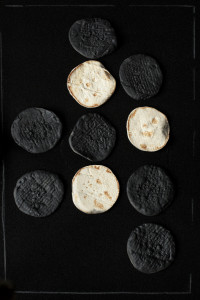 Borrowing from archaeology, the exhibition delves into an array of associations or surfaces, while taking the liberty to explore fragments and particles without attempting or feeling the need to assemble them into a logical disposition. The show proposes to examine the syntax of a collagist composition through the cracks and interstices between the realistic and the fantastic, the religious and the secular, the ironic and the tragic, the pleasing and the painful, be it a one-off manifestation or an expanding narrative.

Robert Stieghorst‘s works touch upon imminent disasters and apocalyptic events. While
pertaining to the grand and miraculous, however, they avoid the spectacular. The choice
of collage, a medium that leaves room for uncertainty, gives rise to a new syntactic 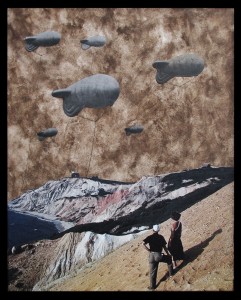 formation. Stieghorst uses an infinite reservoir of images. Like a bricoleur, he constructs new meanings from ready-made sentences found previously in an entirely different context. He tries to reset the reality in which these images transpired, and furnish them with a fresh perspective, an act of hybridization that spawns a third space in which prevalent truths are either undermined or reaffirmed, a place whose associative dynamics is not entirely clear. This inherent instability is reflected, time and again, in the works’ compositions, where he strives to set imagination anew, a vital act in an era in which this human faculty becomes systematically eradicated by blinding spectacles.

Far from his grand works in such media as cinema and video, for which he became known, Yoseph Joseph Yaakov Dadoune has recently drawn energy from the “frugal” art of drawing and its photographic representations. Notebooks and series of works on paper reveal complex conceptual formulations using plain raw materials and ostensibly insignificant objects. At the same time, one discerns the meticulous choice of high-quality paper as printing surface. One image excerpt follows another, images are folded in different ways, and fluid stains explode and become smeared on the paper. Acidic, post-nuclear explosion hues are juxtaposed with digits and numbers. Some of the works are dated in relation to an actual reality, like a war diary scribbled in a spontaneous, intense wave of the hand on countless sheets during a military operation in Gaza. Others contain a counting of time via an 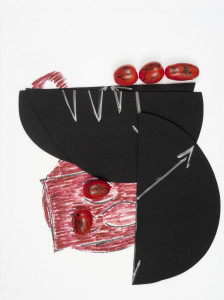 imaginary dating. All works reveal a near-bulimic reproduction. In An Arab Spring (2014), a series comprising 233 photographs and animated sequences, Dadoune edited countless mathematical combinations of black and white pita bread images. Order and randomness, hybridity and deconstruction are rendered in coded forms oscillating between the lingual and the visual. In Tomato Games (2015), cut pieces of black rubber, like the industrial polycarbonate sheets used in greenhouses, transform into a disc stretched and cut in what appear like sex positions, and put into various compositions alongside the rough colored tomatoes. It is a stratified interplay of red and black, raw and burnt, like the yearning of a substance pulled out of context to return to its original place.

The work of Shahar Marcus and Nezaket Ekici, who in recent years have been collaborating on performance and video works, is rife with ritual and ascetic, symbolic and metaphysical acts, usually in desert settings against the backdrop of a primeval landscape. Their works raise questions about culture and religion, space and time, while blending collective memories and religious traditions with the unique, temporary and physical experience anchored in the here-and-now.

Their artistic collaboration reinforces the dependence between man and god, and between man and man, manifested in forces of attraction and repulsion, vitality and solace, interwoven with destruction, a unity of opposites in which death is revealed to be equal to life. Water and salt are key motifs in their video Salt Dinner (3:16 min. 2012), in which the artists float in the Dead Sea, satisfying their hunger with an exhausting feast held upon the water. These elements, which are crucial to human existence, infuse their work with the excess of life and death as the gluttonous feast becomes a perverse parallel of the Last Supper. 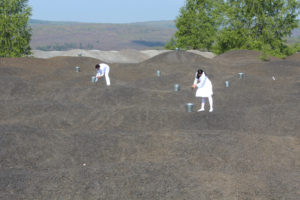 In Fossils (12:49 min, 2014), Marcus and Ekici operate in a desolate landscape in Halde Lydia Camphausen, Quierschied in Saarland, Germany. The artists collect slag as a residuum of coal and carry it to the place, where the coal originally came from into a cave. In order to become one with nature, they find their last place to stay in a bed, becoming fossils by being covered by black coal, the product of their labor.

This exhibition is supported by Israeli Embassy in Berlin.