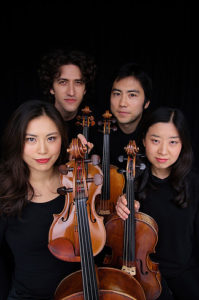 The Quartet Berlin-Tokyo was founded in 2011 by students of the two conservatories in Berlin. Only a few months later they celebrated initial success at the ARD International Music Competition in Munich, winning a special Prize. Since then the quartet won numerous competitions including the Carl Nielsen Competition in Copenhagen, the prestigious Franz Schubert Competition in Graz, Young Concert Artist in New York, the Orlando Competition in Holland and others.

The ensemble has performed at numerous national and international concert venues, including the Hamburg Laeiszhalle, the Berliner Philharmonie and the Concertgebouw in Amsterdam. In addition, the four young musicians were invited to renowned festivals such as the Oslo Chamber Music Festival, the Takefu International Music Festival, and the Heidelberger Frühling.

*Free entrance, donations for this concert will be gratefully accepted.