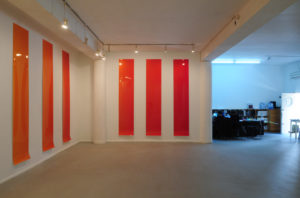 The display in Yanai Toister’s “The Keepers of Light” (2010), consists of photographic prints in glossy color, printed in a 300×60 cm rectangular format and suspended vertically, side by side, on the walls of the Gallery. The colors of the prints were determined by a fixed, computer-applied mathematical formula that started from primary red and progressed through orange, yellow, green and cyan to primary blue. 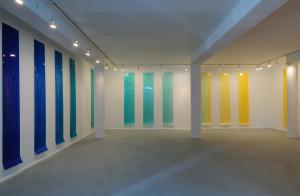 The original model for these works was the façade of Dan Panorama Hotel in Tel Aviv, designed in 1970 by the artist Yaacov Agam. Toister initially sought to extract samples of Agam’s colors from a photograph of the façade, but while doing so he discovered that faithfully reproducing the colors as prints on photographic paper was impracticable. He therefore rejected photographic extraction in favor of the computer and was thereby able to reproduce the rationale behind Agam’s work, namely gradational transition from one color to another. The exhibition thus presented computerized simulacra that mimicked the logic of photographic reality while simultaneously abandoning it. It was a flamboyant, spectacular, all encompassing finale to the move that lies at the heart of Toister’s work, the logical conclusion of a carefully reasoned argument that he has been developing since his early days as an artist.

Yanai Toister is an artist, curator and writer. He received his BFA from Bezalel Academy of Arts and Design, Jerusalem and his MFA from the California Institute of the Arts (CalArts), Los Angeles where he studied under the supervision of Allan Sekula. Toister is currently a senior lecturer at the Shenkar College of Engineering, Design and Art in Tel Aviv as well as a Ph.D. candidate at the University of Sydney (dissertation title: ‘Photography from the Turin Shroud to the Turing Machine’).