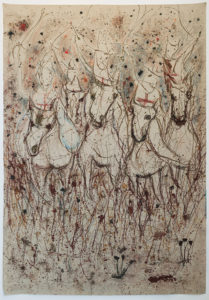 ‘What’s the Black Dog Doing With the White Girl’s Dress’ is a two men show that will take place at Circle1 Gallery between January 11th and February the 16th 2019.

Boyan’s works exhibited in ‘What’s the Black Dog doing with the White Girl’s Dress?’ are a part of a larger cycle of paintings. Boyan used a 100 meters long canvas roll and intensely painted on it, once he was out of it – the work was completed. The paintings feature characters that Boyan had repeated over the years, such as the pirate, the clown, the magician, and the freak, as well as his- historical figures from different eras and contexts, among others, the figure of Jesus Christ. All figures are male heroic figures who have been absorbed into our shared cultural memory from early childhood.

Dor progresses intuitively, reworking the themes across several paintings and incorporating elements from a former painting into the next. At times, the participants that figure in one composition morph into other related characters. Once a cast of characters has been determined, a sexual intrigue begins to evolve, bringing essential elements to light. A balancing act between art history, the self, and the sensual realm, being the orientation of Dor’s work.

Dor and Boyan seem to share the curiosity of studying similar scenes deriving from ordinary life, as well as responding to Christian iconography and the tradition of Western art, yet, aesthetically their works speak two different languages — Dor’s works are painted with bright colors, describing clear figures of humans in passionate situations, while Boyan uses a much darker color scheme and strong expressive lines, describing abstract dark figures.

This exhibition is supported by: