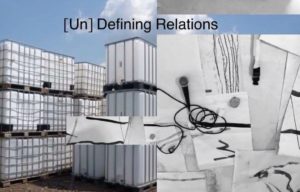 In both works two artists collaborate in a  search, while performing, to define or to undefine their bodies, the spaces around them and the audience, through differences, similarities, memories, boundaries and imagination.

Katja Pudor and Milena Kipfmüller create in Transit a laboratory in order to investigate different ways of spatial and acoustic traces.

It is an open proposal for the artists and audience to follow points, places, lines, tones and frequencies (visual and acoustic) referring to how an imaginary space can be crossed and established and/or how the extensions of its associated edges can be dispersed.

Within their artistic agreement they construct and mold the imaginary within a game of parameters.

The Berlin-based artist Katja Pudor studied fine arts in Kunsthochschule Berlin Weißensee with Katharina Grosse. Her medias are drawing, installation and performance.  Katja Pudor explores the process of artistic work as a social space in different constellations combining different medias. Her recent installations, drawings and printmaking raise the questions how the “recent past” (Walter Benjamin) as past and present at the same time can be made visible. Different sediments of memories, meanings and references are released and incorporated through her artistic process. www.katjapudor.de

Milena Kipfmüller studied oboe and piano (São Paulo/USP), musicology and applied theatre studies in Gießen and Paris with Heiner Goebbels, Xavier Le Roy, Mathilde Monnier and Antonio Araújo. Since more than a decade she works on live projects, installations and performances in urban space, scenic concerts, radio plays performed live and for German radio stations. Her work focuses on the power of sound that is used as the main mean to create “morphorealistic” situations which can be set in galleries and theatres but are often developed as well for urban environment that interacts with the work. The boundaries between (live) radioplay, (music) theatre, (urban) opera and (acoustic) composition are permeable and expanded. www.milenakipf.de

When several vessels connect with each other, they are described as communicating vessels. The surface of the liquid that fills each of the containers is the same level everywhere. An imbalance in levels is observed if:

In their first duo performance, which follows multiple collaborations within larger constellations, Hori Izhaki and Thomas Reul activate our interrelationship with water to explore questions regarding bodily and social structures, political equality and imbalance. Through physical interactions with the three states of water (solid, liquid, gas), the artists offer performative reflections on difference, singularity and interaction.

Her performances are designed to associate natural and man-made materials and pertinent scientific concepts with the social realm to formulate visual understandings of human interactions. This is achieved by providing encounters with the chosen materials in volumes and contexts they do not usually appear in, thus dislodging them from their established semantic place and freeing them to become agents in the desired process of association.

As part of his photography studies at the Folkwang University of the Arts, Thomas Reul’s artistic form of expression has expanded beyond the two-dimensional “silent image” into the three-dimensionality of space and the processual nature of the movement. This development was strengthened by the studies at the Academy of Media Arts in Cologne, as well as the work with the action lab PAErsche.

In his work, Thomas Reul examines ordinary perceptual experiences in different ways as well as the interaction of materials from everyday use, and the body and expresses them with various artistic media.

The forms of expression result from the specific quality of the combination of body, material and the respective topic.

He tries to enter into a dialogue in which the material is shaped by him and in turn opens up new forms of thinking through the processual manifestation of the material. He is primarily interested in physical, viewer-oriented forms of work.