The video work “GazaCanal” is a mockumentry that was made for the Gaza canal visitor’s center. The film is constructed like a promotional or propaganda film for an invented project – the digging of the Gaza Canal – a project that allegedly started in the year 2000 and rendered Gaza into an island completely disconnected from Palestine / Israel.

This work can be read as offering a futuristic model of peace through global, economic and touristic projects. However, the work actually offers an extreme realization of the long-lasting Israeli fantasy -“to throw all the Arabs into the sea”. 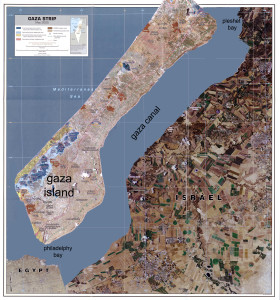 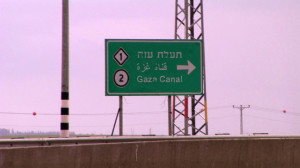 The work is a satire that ridicules Israel’s long history of national projects that change the environment and shape it according to a half biblical and half modernist vision.
The GazaCanal project is based on 9 min video and installation of souvenirs (t-shirts, Beach Towel and cups). the project was first shown in a solo exhibition in Rosenfeld Gallery in Tel Aviv and since than was shown in different museums around the world (LA MEP Paris, Museum of Contemporary Art in Seoul, etc.)