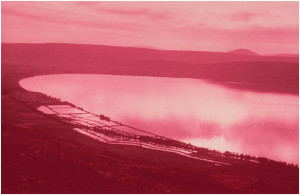 Sharon Ya’ari’s works which will be shown in his next exhibition at Circle1 – “Scorpion Pass” – focus on ordinary objects and routine life throughout the country, while inducing from them a range of complex socio-political sensitive insights. Sharon Ya’ari´s photographs depict the remainders of some past privet action and motivations, questions about local identity, and about the way trivial things become charged with meaning by being present over an extended period of time; laying there, piling up, accumulating, taking form. The images have a story, usually one related to existence and near-extinction.

In the center of his recent exhibition, a projection of 80 slides which decompose and reconstruct an image of the Sea of Galilee, 35mm slide, that was taken in 1969. As happens to images from the era the colors faded away and the loaded scenery has been dyed red. 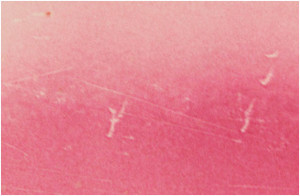 The original image is being deconstructed to segments that during the loop projection compose a sequence; getting close and move away, from the abstract to the descriptive, and so forth.

Additional works in the exhibition are prints made from slides that were photographed by soldiers that traveled in the late 60’ throughout the desert in Israel. These privet slides were later taken over by the educational system of the army.

Time is present as a raw material in the exhibition, not as a documentation of change, but as a contemplation on lost histories, and the ability and limits of photography to cope with them.

Even when it faced with its inability to fully describe reality, photography is revealed as a medium that is capable, maybe now more than ever, to intermediate historical narratives and contemporary social-political complexity. The observation act is crucial, it hasn’t yet exhausted itself.

Sharon Ya’ari (born 1966), lives and works in Tel Aviv.
Ya’ari graduated from the photography department of Bezalel Academy of Art and design, Jerusalem, in 1994 and received an MPhil from University of Derby, England in 2002.
Ya’ari’s works focus on ordinary objects and routine life throughout the country,
while inducing from them a range of complex socio-political sensitive insights.