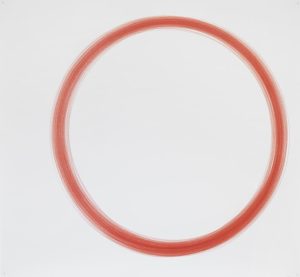 Stereo is the first joint exhibition of the siblings Saskia and Tilman Wendland, curated by Yael Bartana.

The exhibition title Stereo, with its sign of two intersecting and overlapping circles, proposes a genuine investigation of the literal parameter specified by the gallery’s name “CIRCLE1”. Stripped off its reference to Dante’s first Circle of Hell, where the virtuous heathens reside in Inferno after death, all that remains is the geometric form, the round shape with no beginning and no end.

The Wendland siblings, the two independent artists Saskia and Tilman Wendland, brought their works together in this show, intersecting and overlapping in the gallery space. They share the mutual ability to engage through basic, minimal aesthetics with basic building blocks and processes of art making: its preparation by the artist, its temporality, and its spatial constituents. Without haranguing to the viewers, but by contrarily employing scarcity, Saskia and Tilman Wendland demand first and foremost to take art seriously as a discipline. Their mutual interest in the aspect of the art works’ coming into being and ensuing presence disengages their work from arts’ commodity factor.

Although both artists’ correlation of overarching topics of art making and a visual retreat to basic formulas has a rich history in modern and contemporary art, such as Kasimir Malevitch’s Black Square and Russian Suprematism or American Minimalism, they work as practitioners of art, instead of reiterating formal schemata of artistic expression. This “faith in the artistic process,” as termed by Harald Szeemann in the exhibition catalogue of “When Attitudes Become Form” from 1969, is central to the works of the Wendland siblings. But their unique approach of returning to the basics of art production, of accentuating pre-art processes, such as the relationship of the artist to the act of drawing simple geometrical structures, or the emphasis on the constitution of a certain space as a place of expression, tests the sustainability of being an artist and of making art in a particular space, without actually establishing conceptual frameworks or artistic means of assistance, such as performances or archives.

Saskia Wendland exhibits several large red circles on paper, drawn each over an extended time-span of several months. They are the product of a disciplined ritualized process. She stands every morning and evening in close proximity to the large paper, pinned to the wall, and draws a circle, measuring the full length of her arm, engaging her whole body in the practice. The repetition of this engagement with the form forces her to start and conclude the day as an artist, literally practicing her craft and the difficult task of drawing a simple circle. While Saskia Wendland interacts with the form of the circle as a challenge and as an act of respect towards it, Tilman Wendland engages with the gallery rooms and pays tribute to the space. He partakes in a dialogue with the room by listening to its language, learning its vocabulary and grammar. By accentuating characteristics of the space and sensitively deciphering its needs and virtues, he speaks with the room on its own terms, challenging it, coaxing with it or just by being a patient listener. The installation emanating from this is a record of the conversation.

Both artists end their processes of interaction with form and space at a point they determine to be right, when all has been said and completion is felt. They stop their practice right at the moment of visualization, leaving traces of the artistic process that function as documentation of what has been, often even destroying the material manifestations afterwards. Their work emphasizes the becoming of form, rather than either attitude or form. Saskia Wendland’s distinguishable repetition of circles, with its vibrant effect, points at their sequential apparition, rather than their manifestation as one single and permanent form. Tilman Wendland’s temporal installations that rely on the permanence of the gallery space disappear after the exhibition. Saskia and Tilman Wendland remain faithful to their personal artistic practice and processes, circumventing hollow gestures, grand narratives and reiteration of formulas. The outcome, as in the large drawn circles or the mutations, transformations and apparitions in the gallery space, hold the mystique of the answer to what constitutes a work of art at a loss for words, but in capacity of the image.