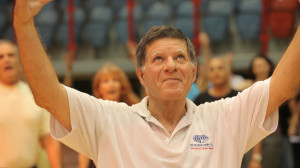 Alona Harpaz’s video Salt # 3 which will be displayed at circle1 in the next exhibition, is a fascinating experience relating to Israeli folk dance. Israeli folk dance answers some of the parameters required to define a Folk dance such as being performed by people with little or no professional training, but other than this characteristic none of the attributes related to the term appear in any of them.

They are not stemming from a long and ancient tradition, but rather were constructed around the time Israel became independent as part of the grand project of building a national identity, by adapting cultural components from other culture and mutating them into an hybrid form now perceived as an Israeli one.

And yet folk dances are in great popularity in Israel and young and old participate in them. That there was actually no folk to develop them along historical periods and would there be a folk it would never dream allowing such dances is a fact that does not seem to trouble the participants of the game. Israeli folk dances are a locus of discrepancies whose inconsistencies, charming as they might be, point towards the attempt to invest authenticity and validate assets that simply are not there and as such are part and parcel of the myth concerning Israel as an age old nation.

But it is these discrepancies that make Alona Harpaz’s Video Salt # 3 a fascinating experience. The discordance rooted by the fact of the dance is reflected in the bodies and faces of the dancers. They are not exactly your idea of graceful dancers. They are not young and beautiful and the stories of  their life are written in wrinkles and creases, in bodies gone wild and facial features hardened to extreme. But once they dance they reveal what is not there, they display hidden desires and gone possibilities and the dance becomes an essay in space about what could have been and went awry.

This is the source of the great melancholy enveloping the dancers and the origin of the nostalgic patina that contains their movement. Harpz deals with the projected dream with sensitivity and compassion. They are on the verge of the burlesque but are being saved by the artist respecting their yearning. Their dignity, in spite of the impossible place they maneuvered themselves into, is restored.