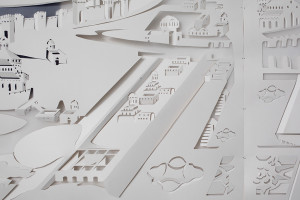 In our next opening on May 17 we will host the exhibition “White to Play and Win” by Peleg Dishon (1979) – an Israeli new-media artist. “White to play and win” is a particular task presented to a solver of a chess problem. It means that the solver should play the white pieces and his goal is to checkmate the black. However, this is not a battle of two opponents; the game is played by one solver that plays both sides.

“White to play and win” is an exhibition composed of two major pieces. The center piece is a paper cutout landscape which oscillates between map and model – a depiction of a celestial city. The second one is a composition of popup elements drown from the map and serves as pieces or pawns.

Dishon’s body of interdisciplinary works testifies to original, refreshing and complex thought, to impressive technical skill, and to great curiosity. Notable in his work is his awareness of fundamental artistic questions touching on the status of the image and to the negotiation between the visual and physical and between light as a material presence in space and light as a projection.

Peleg Dishon succeeds in turning paper into a lead actor in a rich and mysterious imaginary world that he invents though surprising personal work processes and a range of seemingly contradictory means: intensive handiwork, cutting-edge office technology, projection and photography. The plain and flat page as neutral raw material has different states of being in his work: from a three-dimensional surface with cut-out images on it to an almost transparent screen, from a light-maker to the source of a ghostly appearance of illusory cinema.