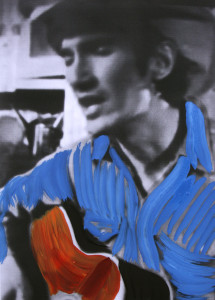 In our next show (which opens on Friday, June 27) we will host the exhibition “Heartworn Highways” by Olaf Kühnemann. In Heartworn Highways Kühnemann works impulsively. Everything derives from imagination, there is no clear narrative. Just like reconstructing a new language, this is an exercise for creativity emerging from the dead end situation of every day studio practice and the challenge for constant productivity and inspiration.

Heartworn Highways is all about impulses. It’s a gathering of moments of enthusiasm and beauty. A country song that serves as a departure point for the mind to travel and dream, a bicycle and the hidden beauty behind its craftsmanship. Scattered images, impressions, pictures which Olaf Kühnemann kept on his studio walls as small windows for inspiration to come in, thought provoking elements, or pure generators of feeling.

This is the creative process of his work, more or less exposed out in the open. There is a hidden intention to play and experiment with the notions of control versus the unpredicted, to unravel and reveal the covered layers behind the surface of his paintings, to travel back and forth inside himself, his inner thoughts and his unconscious. Heartworn Highways is the place where inspiration is lost, and found.

The artist’s family memories and issues of identity and belonging, always at the core of his work, still remain present, but this time are revisited and communicated in new ways. Through a process of experimenting and transformation, Olaf Kühnemann “pulls the carpet under his feet” as he likes to describe it,  incorporating other mediums apart from painting in order to transmit feelings and create a certain atmosphere of warmth and intimacy.

In Heartworn Highways, Kühnemann works impulsively. Everything derives from imagination, there is no clear narrative. Just like reconstructing a new language, this is an exercise for creativity emerging from the dead end situation of every day studio practice and the challenge for constant productivity and inspiration. Through habitual repetition, the movement of the hand painting, wanting to break the norms, leaving as much room as possible to be impulsive, being affected by music, by light, by mood, movement and the objects around him, Olaf Kühnemann creates a playful situation, a process of renegotiation and quest on the boundaries of his artistry and personal expression.

The title of the exhibition is borrowed by the homonymous documentary film about the founders of Outlaw country movement in Texas and Tennessee, directed by James Szalapski and produced by Graham Leader (Heartworn highways ,1976, SEA LION FILMS). The film and it’s soundtrack served as a starting point, accompanying Olaf Kühnemann in his studio throughout the creative process. A short clip of the film will also be displayed during the exhibition.

Born 1972 in Basel, Switzerland, Olaf Kühnemann  lives and works between Tel Aviv and Berlin where he is currently a resident artist at Künstlerhaus Bethanien. His artistic training began quite early, at the age of 10, when he started working as an apprentice next to the Israeli artist Zvi Lachman. Later on he continued his education at the New York studio school  (NY, 1990-1992) and completed his Master’s Degree at Parsons School of Design (NY, 1992-1994). Olaf Kühnemann is a recipient of the Istracard and Tel Aviv Museum Art Prize for an Israeli Artist. During the last years has actively exhibited in various galleries in Germany, such as Samuelis Baumgarte Galerie (Bielefeld), Alexander Ochs Galerie (Berlin) and Pavillon Am Milchhof (Berlin), while at the same time he has had a strong presence in Israel with several shows in institutions such as Herzliya Museum of Contemporary Art (Herzliya), The Israel Museum (Jerusalem) and Tel Aviv Museum of Art (Tel Aviv). His works can be found in public and private collections in England, Switzerland, Israel, Austria USA Germany and Italy.