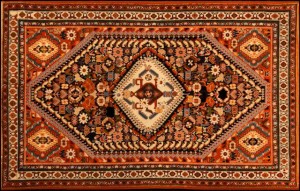 Nevet Yitzhak (1975) often deals with contemporary political and cultural issues by usage of real archive materials which she disconnects from their original context and manipulates with the help of digital tools. She challenges our perception of the past, rewrites history and raises questions regarding cultural heritage and collective forgetfulness within a complex local identity.

In our upcoming exhibition Yitzhak will be showing her piece Carpet (2012) – a one channel projection of an antique oriental rug with moving animated decorations.

Yitzhak’s work Carpet is a video of a colorful Persian carpet meticulously adorned with geometrical and flower shapes, she slowly disharmonizes the fine balance, changing the order and equilibrium and thus a sense of chaos and lack of control.

Nevet Yitzhak has exhibited in several solo and group exhibitions such as Herzliya Museum for contemporary art, Herzliya; Petach Tikva Museum of Art, Petach Tikva; International Festival for Art and Alternative Visions, the Tokyo Metropolitan Museum of Photography, tokyo, Japan and has won important and prestigious prizes; the Givon prize for new art from the Tel Aviv Museum of Art in 2013, and the Creative Encouragement Award, of Israel ministry of cultural & sport in 2012.