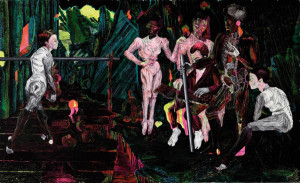 Michal Helfman will present in the upcoming exhibition at Circle1 a group of works on paper, made ​​in a scraping technique from a layer of oil pastels, exposing another layer of colorful acrylics lying underneath it. the group of works called “Barbarism of Reflection” takes its name from a term coined by 17th century Italian historian Vico. This expression was used to describe a critical moment in the history of a civilization, in which, according to Vico, significant cultural achievements (manifested in its increasing reflective capacity), are eventually what lead this civilization to deconstruction and barbarism.

Thinking of the interaction between the reflective and the barbarian, Helfman’s works present images of individuals and groups living in a futuristic era, trying to recover and practice the remaining fragments of Western culture civilization.

The video “%” was made ​​in collaboration with Noa Zuk and Ohad Fishof. This work is a choreographed dance built in a form of a musical canon. Each dancer in the group performs the same movement as the one before him, in a few seconds delay. The dancers therefore are subjected to a repetitive “assembly line” choreography. Through the use of their bodies they create a human loop, existing in the gap between a mechanistic and a tribal repetitiveness.