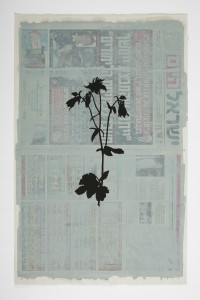 Larry Abramson’s exhibition at Circle 1 (opening on December 6) is titled “Das kleine Blumenbuch,” after a book of botanical illustrations published by Insel Verlag, Leipzig, in 1933, with woodcuts of German wild flowers by Fritz Kredel, based upon drawings by Rudolf Koch. In the summer of 2014, following the end of the recent war with Gaza, Abramson collected the daily issues of the pro-government tabloid “Israel Today,” and in his studio defaced them with layers of oil paint. The colors he used for this act were based upon his mental memory of the “utopian” sky of his childhood in Jerusalem. 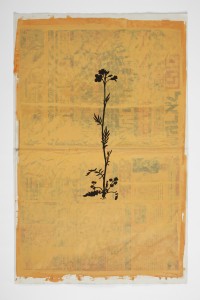 After completing 33 such acts of defacement, Abramson proceeded to enlarge 33 botanical illustrations from an original copy of “Das kleine Blumenbuch” he found in a used-book store, a book that most probably made its way to Palestine with the library of a German Jew who immigrated following the rise of Hitler in 1933. Abramson turned the enlarged illustrations into black silhouettes, which he then had screen-printed on top of the paint-covered newspapers. Each silhouette of wild flower was printed once on top of one newspaper, forming a cycle of 33 black German wild flowers over defaced Israeli daily newspapers. 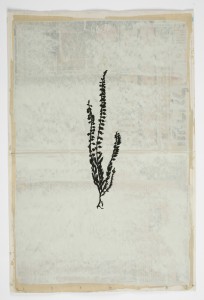 In his work Abramson has often investigated the status of “nature” as an ideological mechanism for the construction of national identity, placing the particular and personal experience in opposition to the generalized and codified cultural icon. His seminal exhibition “tsooba” (1995) placed the Israeli landscape under critical scrutiny, and had a lasting influence on the theory of Israeli art.

The troubling relationship between the German national movement and Zionist ideology is at the heart of Abramson’s “Das kleine Blumenbuch.”

Among the awards he has received are the Kolliner Award (Israel Museum, 1979), the Jacques O’Hana Award (Tel Aviv Museum, 1991), the Minister of Culture and Education Award (1998) and the Pundik Prize for Israeli Art (2007, Tel Aviv Museum of Art).

His exhibition “tsooba” (Kibbutz Art Gallery, Tel Aviv, 1995) became the focus of a critical discourse around Israeli “scopic regimes” and in particular the role of abstraction as a mechanism of denial. His project “Mini-Israel” (Israel Museum, 2006, with 45 artists) offered an alternative utopian model of Israeli space, and his solo-exhibition, titled “1967” (Gordon Gallery, Tel Aviv, 2012) cast a critical and elegiac eye toward the consequences of the Six Day War.

Over the past 25 years he has participated in many exhibitions and other projects in support of peaceful and equal coexistence between Israelis and Palestinians. He was a founding member of Artists Without Walls, a group of Israeli and Palestinian artists against the occupation. In 2007 he initiated “Desert Generation”, an Israeli-Palestinian protest exhibition marking 40 years of occupation (Artists’ House, Jerusalem, Kibbutz Art Gallery, Tel Aviv, Meneer de Wit Gallery, Amsterdam, Metropolitan University Gallery, Manchester).

He was Chairman of the Bezalel Academy’s Fine Art department between 1992-1999, where in 1996 he founded and directed the Bezalel Program for Young Artists, a post-graduate program which soon became the first Master of Fine Art course in Israel.

Larry Abramson was guest lecturer at the San Francisco Art Institute and HAW in Hamburg, and is currently Professor of Art at the Multidisciplinary Art Department at Shenkar College, Ramat Gan, where he is head of the department (since 2013).