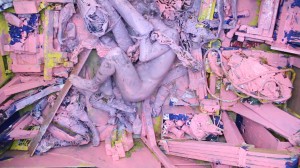 In our upcoming exhibition the Israeli artist Gili Avissar will show his video work “Pink” (03:13 min) as well as a series of Drawing Installations made with Ink on paper and fabric.

In Avissar’s video the color PINK becomes a place; by its materialization in a specific, actual site it unfolds an ongoing process of camouflage and erasure, dismantling and rebuilding itself. Avissar, whose work is often synonymous with a rough yet poetic sculptural touch, is no less an action artist: “More than I intend to build something new, I seek to erase the memory of what was there before, so as not to enclose myself in a depository of past works,” he says. This continual shifting and renewing of past artifacts should be understood in terms of freedom of movement – but not as an abstract ideal, rather as an adherence to a continuum that unfolds from one work to the next, constituting each step as a localized station in an evolving sculptural and performative body of work.

An inseparable part of these transformative processes are the video and photographic documentation which Avissar undertakes in the studio. After having transferred the Urban Remains exhibition back to his studio he began to ‘erase’ its parts by soaking them in heavy layers of paint – a process which he accompanied by a fervent self-documentation. From deconstructed parts the installation again assumed a unified form, with the result comprising into an alternative studio within the regular one; and inside this space, which gradually became a pulsating core with a life of its own, emerged a series of creatures that the artist himself embodied. After the first figure in the series, came a succession of other figures, each characterized by a different color. As the series progressed these characters became increasingly elastic in shape and color.

The Oval Drawings are an endless cycle of images, as one image is “deleted” by its successor. While in his video Avissar erases his previous works with the coloring process, here he cancels the singular image in his own drawings by overloading them with endless shapes and images.

Gili Avissar’s works are modular by nature, moving constantly between performative gestures to object-making. Sculpture, painting, installation, and video performance are Gili Avissar’s main focus of interest as he attempts to uncover his own, as well as the work’s, flesh. He exposes the work from the inside outward, rearranging it in a new order through intense and colourful installations.

Most of Gili Avissar’s installations are created while residing in the workspace for long periods, as the perimeters of the gallery become temporary boundaries, a container within which the installations are constructed. Avissar’s creative process generates a place to be in – to breathe, build, and transform. Like a person hauling around his meagre possessions, he collects, accumulates, and recycles his own objects so he is not left drained of matter. The sense of being a nomad is existential for him as he strives to create changing, unfixed works.

Documentation through video/animation and photography are the only permanent states of  Avissar’s works, allowing them to be in a continuous state of change and development. Thus, he thinks of his works as raw materials, which he uses continuously without reaching a conclusion.