Solmi reinvents the visual world of animation by creating and sequencing images using behind-the scenes technology that he borrowed and adapted from film and gaming. For “Chinese Democracy and the Last Day on Earth,” Solmi has created hundreds of drawings and paintings as skins for a 3D game environment. The process involves real time performance recorded inside that environment through motion capture technology. Solmi himself enacts all the main characters in his films and provides the voiceovers, becoming, in effect, a one-man film studio.

Through satirical commentary on authoritarian power structures Federico Solmi’s videos aim to lampoon the contemporary societies and the self–destructive nature of mankind. In contrast with their playful faux-naïve aesthetics the videos indict a male dominated, hierarchal world controlled by corrupt, arrogant dictators, politicians, business and religious leaders as forces behind the disintegration of ethical and moral values. 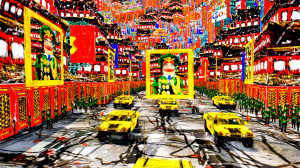 Solmi has envisioned Chinese Democracy and the Last Day on Earth as the central component in a trilogy. The first part, or prelude, A Song of Tyranny, introduces the Chinese protagonist being interviewed by an american journalist about his rise to power: a leader becoming a dictator – idolized, invincible and hell-bent on the invasion of America. In Chinese Democracy and the Last Day on Earth, the tale begins idyllically in the Garden of Eden and ends in a bloody takeover of the Times Square. 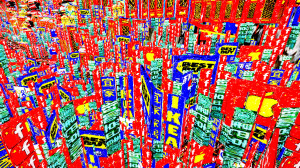 Solmi’s earlier videos have featured a selfish and greedy Wall Street executive, Douche Bag City (2010), presented in The Dissolve—2010 SITE Santa Fe Biennial, and a fictional online porn–addicted Pope, The Evil Empire (2007), which has been at the center of several high–profile censorship cases in Europe, the most recent in 2011.

A self–taught artist, Federico Solmi was born in 1973 inBologna. In 2009 he received a Guggeheim Fellowship Grant in Video category. 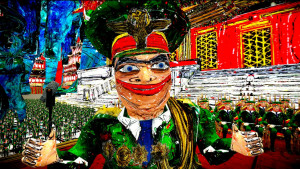