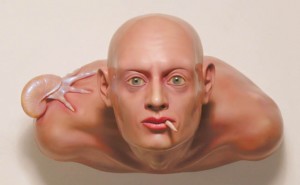 In our next opening we will show a series of works by the Israeli sculptor Eli Gur Arie, who creates fascinating techno-hybrid pieces that go beyond the boundaries of our comprehensible world. 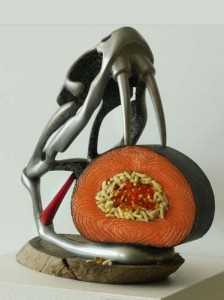 “Eli Gur Arie’s works stretch the strangeness to the uttermost limit, and produces what appears to be at first glance sated objects, objects that celebrate a rich existence, that posses an aesthetic resilience, a hermetic visual economy, bounded by beauty made extreme, imprisoned in an appearance that nullifies every kind of consciousness: too beautiful to ask questions, too spectacular to be troubling. On this basis begins the strange negotiation that Gur Arie’s works conduct with the world.

Two axes possessing a contradicting potential constitute Gur Arie’s artistic syntax: one is the fantastic axis, which has to do with nullifying any obligation to logic, diapason of existing forms, physical, literal and other conditionings; the second is the didactic axis, which attaches, as it were devotedly, to the act of transmission and to its maximal efficiency, while harnessing the extreme means  facilitating understanding and communication. 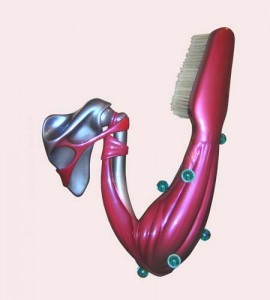 The Material is the central subject in Gur Arie’s art, and its status is extremely beyond that of a means. Major fields of meaning intersect in it, depend on it, or experience fundamental shifts by its means. Within the plethora of material appearances interspersed through Gur Arie’s works, an action of embalming the simulated material is taken. All the mucous, the sticky, the wet, the liquid, is frozen in a sculptural stasis and suspended in a glittering and spectacular radiance. The numerous types of recoil that might be aroused by seeing such materials in life are replaced by a tranquil stance; the sense of revulsion is converted into seduction and enchantment. The finish becomes a protective rhetoric. The repugnant feel of the clammy skin of a snake or a frog, for example, remains a distant memory when viewing the connections of these wet presences as they float towards us from a protected, glazed and jewelry-like place. The patina produces a distance and an inaccessibility, which negate the recoil and create a seduction. The recoil from the biological strangeness is replaced by a negotiation that is based on a desiring gaze. 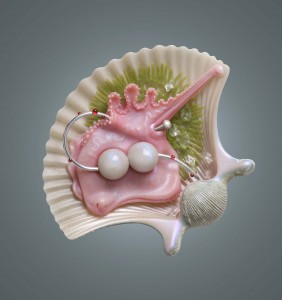 The surfaces of the works (a product of spray painting and various epoxy varnishes) are also responsible for an element that is of the essence in Gur Arie’s works – their opticality, which is in excess of their sculptural existence. They are experienced more as a phenomenon, as a kind of appearance, than as a mass of material that takes up space. There is a feeling that the works first maltreat the eye and only then address themselves to establishing relations with the scale of the viewer’s body. The way the surfaces are processed and covered  bring the works closer to the world of three-dimensional simulation and computer processing, arenas in which the body and the world of relationships that it activates are pushed to a place of no relevance. 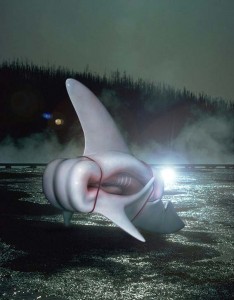 What at first appears to be present in Gur Arie’s works as a world bustling with life, which exists under the rule of surrealistic logic, soon reveals itself as contradicting it: the plethora of strange, unexpected couplings, each possessing a credibility that is immediately refutable, are an outcome of borrowing from sources that are more familiar and accessible than seemed to be the case at first. The range of literary and visual proposals offered by science fiction, as literature and as cinema, the visions engendered by the advertising world and by graphic, fashion and product design, reveal themselves as a source for the works more than the depths of consciousness and the world of the psyche. In actuality, the relation of the works to this visualization is one of realistic translation. Sci-fi images created by man function as sources and as objects of the realism of the works themselves. In a strange way one can think of the works as a dreamlike reincarnation of a degenerated fantastic realism.”

Extracts from the catalogue of the exhibition “Civil Applications” at the Herzliya Museum of Art in 2003, ISBN 965-90609-0-4, Text by Doron Rabina