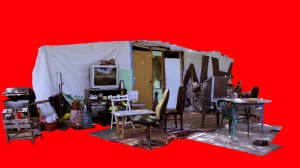 Daniel Landau will present in the upcoming exhibition in Circle1 the video “Open Skies” (2013). The video work presents a tent encampment of homeless people which is situated between Tel Aviv and one of its satellite towns, Ramat Gan. It is a central place, a main transport axis between intersections of different roads and skyscrapers populated with corporate ventures and the stock market.
There, in such a scenario, this neighborhood of tents grew on a piece of grass, a lonely and neglected island in a middle of an urban reality. The tents are constructed from abject materials, left over of building materials, plastic and boards – the leftovers of a consume society.
The video documents the imaginary change which occurs when the background changes and is replaced by a pastoral European landscape of an almost utopic character which stands in total opposition to the real urban landscape. The encampment becomes an attractive postcard but it still can not hide the price of the economic gap between those who have and those who have not.