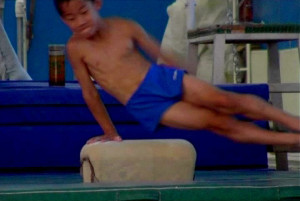 Christine de la Garenne who opens her show at CIRCLE1 at the end of this month will show two video installations: BOKKER (2006) and PLANET CLAIRE (2010). Christine de la Garenne’s video projections deal with the relationship between the moving image and the associated sound. The artist acts as an observer of reality. She documents parts of everyday life by isolating and “dissecting” its details. Her videos assemble short sequences of individual images of the same setting. The combination of aggressive and meditative tendencies provoke an irritating atmosphere.Subtle digital manipulations of visual and auditory aspects add multiple layers of perception and lead to a collapse of reality. The artist creates ambivalence by simultaneously showing different aspects, perspectives and timings of the same situation. Through minimal time shifts and endless repetitions the videos de- and reconstruct and show a polychronic approach to time.

Where Walter Benjamin describes the camera -through slow motion and close-ups- as an operator of the real, Christine de la Garenne uses these same techniques to bring reality into question and to introduce doubt to define our relationship to the images. With use of sound editing and videoloops, she alienates the meaning assigned prior to the images. Instead, the intrinsic images appear behind the inherent clichés, and the mental projections of which they are the fruit are highlighted.. These pictures are no longer subject to a referential principle. Christine de la Garenne refers the viewer to himself and ultimately reduces the video to its essential characteristic: namely a projection space in which the mirage is the metaphor of our relationship to the world: what you see is not what you see but what you project. 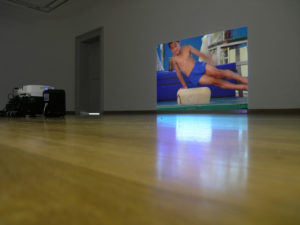 The video Bokker by Christine de la Garenne shows a Chinese boy turning round and round on a vaulting horse. Clad only in shorts, the athlete concentrates every muscle fibre on the act of artistic body control. The rhythmic sound of his hand movements combined with the rise and fall of his breath underscore the magnetic mechanical force of the seemingly endless repetitions. The continuous frontal eye-to-eye shot of the gymnast shows his head and rotating feet in alternating frames, lending the composition a symmetrical equilibrium. In chromatic terms, the intense blue of his shorts stands out, echoed in the colour scheme of the background. The superficial monotony of the movement is broken up by fine variations in speed as well as by an oscillation in the synchronicity and asynchronicity of the soundtrack. By exaggerating a banal act through ad absurdum repetition, Christine de la Garenne succeeds at crafting a subtle work that not only unnerves the eye and ear, but also offers an opportunity for political reflection. 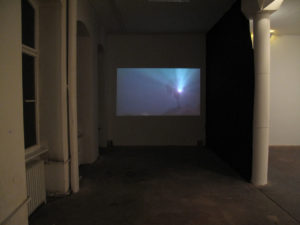 The video projection shows an idyllic nighttime scenery with palm tree and full moon. The moon is the only source of light. Slowly the direction and velocity of the orbiting moon changes. The pale moonlight that poorly illuminates the night sky turns into a glistening pulsating ray of light that successively fades out the surroundings and is reminiscent of a searchlight. The increasing noise of a circling helicopter accompanies the image.

AEON is a video installation that explores the unaccountability and elusiveness of time. The vertical projection shows an hourglass that reflects a room. The sand, which usually measures time by a continuous flow, trickles at different speeds from top to bottom but also in the opposite direction. It seems to be moving independently of space, time and gravity. In AEON the irreversibility and uniformity of time is deranged: while time seems to be persistent in the upper part of the hourglass, the lower bulge fills in a brief moment with sand, or both parts of the glass fill simultaneously. The hourglass never empties completely, the sand flows steadily and without interruption.

The idea of endlessness of the passing time is continued by the videoloop. Time and its perception are presented in their instability, volatility and subjectivity. Instant and eternity, meditation and distraction melt through the continuous repetition. Time remains -even when measured- ungraspable for the mind. The steady ticking of a clock acoustically counters the manipulated flow of sand: the audible and countable time units seem to offer an orientation in the abyss of time. 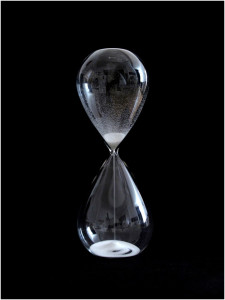 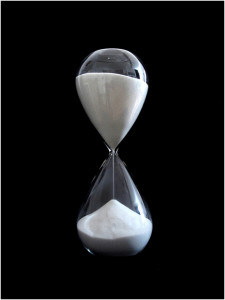